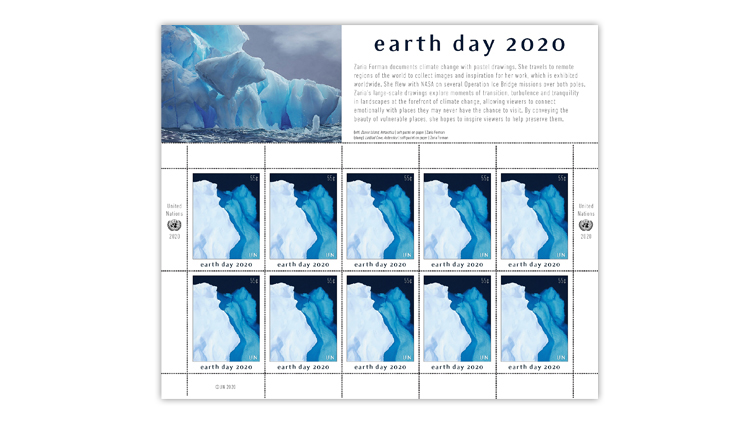 The United Nations Postal Administration issued its Earth Day stamps April 22 in panes of 10. Each pane features the work of a different artist. Pastel drawings by Zaria Forman are shown on the 55¢ stamp and in the selvage of the pane.

The works of six different artists are represented on the United Nations Postal Administration’s new stamps celebrating Earth Day. The UNPA said that it selected artists “whose works are influenced by environmental issues.”

The six stamps were issued April 22 in separate panes of 10, with two panes for each U.N. post office: 55¢ and $1.20 for use from U.N. headquarters in New York City; 1 franc and 2fr for use from the Palais des Nations in Geneva, Switzerland; and €0.85 and €1.35 for use from the Vienna International Center in Vienna, Austria.

The first Earth Day was observed 50 years ago on April 22, 1970. Since then many countries have continued to celebrate Earth Day on April 22. In 2009 the U.N. General Assembly designated April 22 as International Mother Earth Day.

According to the U.N. website, “International Mother Earth Day is celebrated to remind each of us that the Earth and its ecosystems provide us with life and sustenance.

“This Day also recognizes a collective responsibility, as called for in the 1992 Rio Declaration, to promote harmony with nature and the Earth, to achieve a just balance among the economic, social and environmental needs of present and future generations of humanity.”

The selvage above the 10 stamps also includes the inscription “earth day 2020” followed by a brief description of Forman’s work in documenting climate change with her pastel drawings.

The other panes are similar in format with an image in the upper left and text on the right. The UNPA describes this text as “an artist’s statement describing how the planet and sustainability has inspired their work.”

Depicted on the $1.20 stamp is Our Changing Seas IV by Courtney Mattison. This glazed stoneware and porcelain sculpture also is shown in the selvage. In the text in the selvage, Mattison describes herself as “a ceramic sculptor with a background in coral reef conservation biology.”

Both Forman and Mattison are from the United States.